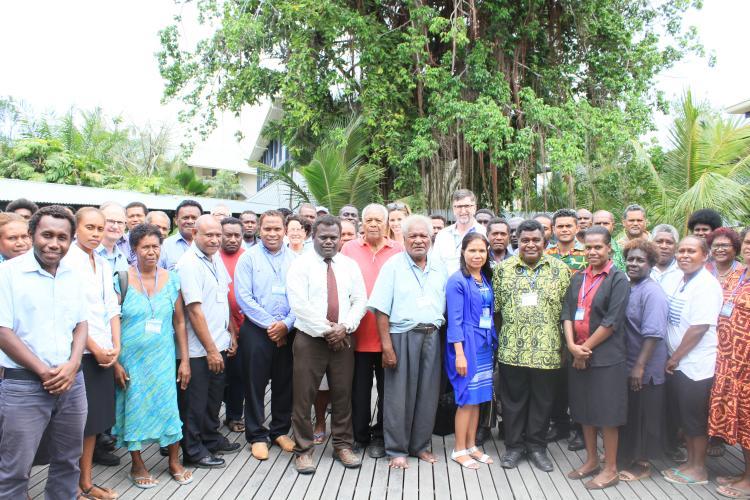 Cooperation between Timor-Leste and Solomon Islands, two emerging economies of the Pacific region, is strengthening the transparency of the mining sector through the Extractive Industries Transparency Initiative (EITI).

The initiative is helping improve Solomon Islands’ transparency over revenue collected from mining and other extractive industries.

“Transparency is vital in ensuring that people and communities get the best outcome from the use of their natural resources,” said Solomon Islands’ EITI National Coordinator Mckini Dentana.

“The mining sector has good potential, but we don’t want a repeat of Solomon Islands’ negative experience with logging, where communities have been torn apart by unscrupulous operators, little accountability and no consideration of sustainability.”

To become EITI compliant, a country’s oil, gas, and mining companies must disclose all payments to the government, with the government in turn revealing what it has received from the industry through payments such as taxes and royalties. The Solomon Islands has been a candidate for EITI compliance since 2012, and has published two yearly reports (2012 and 2013) disclosing company payments and government receipts.

In October, an EITI National Conference was held in the Solomons’ capital Honiara, where two revenue reports were released and a new EITI website was launched. These two supplementary reports provided additional information related to the 2012 and 2013 reports; a new 2014 report is currently being finalized and will be available shortly.

“The new reports include information that was previously not available from mining companies, and paint a clearer picture of the role and reach of mining company interests in Solomon Islands,” said Vincent Obimae, the head of the Solomon Islands EITI Secretariat.

The reports show that the Solomon Islands Government received SBD$150.6 million in revenue in 2012 and SBD$130.1 million in 2013 from extractive industries. The reports attribute the decline in revenue between 2012 and 2013 to a decrease in the international price of gold and silver.

The reports also highlighted that the government received over 26.9 million in royalty payment for 2013 which of this, landowners are entitle to receive 80% or equivalence of 21.6 million but to date only 2.6 million was paid to landowners.

“By having this information accessible to the public though our new website, we hope this will create discussion and dialogue about extractive industries,” said Mr Obimae.

Teakeni says her visit has reinforced her belief that communities have an important role to play in the management of natural resources, especially women.

“In Solomon Islands we have seen that women have been marginalized in discussions over the use of resources, and often miss out on royalty payments in favour of male relatives,” said Ms Teakeni.

“Having EITI information publicly available can help open up dialogue at community level.”

Mining companies, Axiom and Sumitomo are members of the EITI multi-stakeholder group and also took part in the national conference.

“We know that mining can be a blessing or a curse,” said Nicholas Biliki of nickel mining company, Sumitomo. “We want to see that our operations are successful, but we also want to ensure communities see positive outcomes from our work. To do that we need the support of the national government, provincial government, communities and our people to make mining successful,”

Three years after her first visit to Solomon Islands for the setup of the EITI, Elda Guterres da Silva from Timor-Leste secretariat was back in Honiara for the EITI National Conference.

“Solomon Islands has done well, with the publication of its 2012 and 2013 national reports and the setup of its Secretariat,” said Ms Elda Silva.

The National Conference enabled Ms da Silva to share her country’s experience with conference participants, which included the premiers of Choiseul, Makira and Temotu province.

For the Premier of Choiseul, Jackson Kiloe, his provincial government is not opposed to mining, yet nor does it actively support extractive industries.

“What we want to do is ensure that we manage our resources in the best possible way for our communities.”

Send us an email